Continuous measurement of the pH gives additional insight into the processes in the root environment, which enables better and early adjustments, for optimal absorption activity of the roots.

The root environment, where nutritional elements and water being absorbed, is a dynamic environment with changing influences. Five abiotic factors form the basis of the exchange capacity of the roots in the substrate: water content, EC, temperature, pH and oxygen content.

It is very common to steer the first three factors, via continuous measurements. For example Cultilene introduced its WET sensor in the late 90s. With that a part of the plant roots and activity is still not visible. Changes in pH during feeding caused by ion exchange, could give additional information. Up to now, this pH-determination is usually taken along with the nutritional analysis. Most of the time, this happens only once a week, when growers have to send a water sample to a laboratory. It usually takes at least 24 hours before the outcome is known, as a result of which adjustments cannot be done at the right time.

It is a time-consuming manner of examination, and if a sample is left aside for too long, the reliability deteriorates. Furthermore, for propagators, it is a destructive method where they have to squeeze out a cube to collect water for sampling.

The SympH02ny provides a continuous measurement and is the first sensor to measure inside the root environment, instead of in the drain water. This new method will increase the accuracy and makes direct adjustments possible.

The measurement of the SympH02ny is based on a pH-sensitive coating. It changes the shape and structure on the basis of the pH value, through a chemical reaction. LEDs deliver a light pulse, which is sent to the pH-sensitive coating in the substrate through a fiber. The pH-dependent structure of this coating affects the wavelength that returns the pulse to the measuring unit. The difference between the outgoing and returning wavelength is being translated to a pH-value. The meter does not have to be calibrated in the meantime due to the fluorescence-technique.

For propagators, who measure in separate substrate cubes (that are moved on and off during the cultivation), the pH measuring system is made moveable. Cheap plugs / sticks with sensors will be put in a number of pots where they will stay. Fifteen sticks per 10,000 (duo) cubes provide a good image of the pH and thus the roots and plant activity.

The sticks are in the shape of a kind of “mushroom”. The stalk, with the fiber inside, is inserted into the substrate cube. The lower end with the pH-sensitive coating ends up in the wettest part of the cube, where most of the root activity takes place. The cap of the mushroom, with a flat lower surface, will remain on top of the cube, which ensures that the stick is always exactly at the correct depth into the substrate cube and stays there.

A mobile measuring unit is placed on the cap / cover of the sensor. This way, the fiber in the hand meter is connected to the fiber in the connector. A few seconds after the light pulse, the pH can be read.

On top of the hat of the sensor, there is a spring, that shuts off the fiber if the connection to the measuring unit is broken. Afterwards, the hand meter can be placed on a next substrate cube with a sensor. The fact that the sensors themselves do not have be moved, matches with the strict hygiene protocols to restrict the transmission of diseases.

During cultivation at greenhouse farms, two sticks are placed into the slab, five to ten centimeters away from the cube. One reaches into the lower layer of the slab. The other one will remain in the centre of the slab, so it is still possible to measure the active root environment into a later stage of growth. Both sensors are connected to one single measuring unit for continuous measurements. In total, we would say one to two measuring units per valve section. 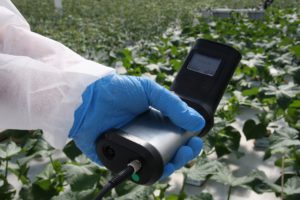